Hi folks.  For this weeks' forum post we wanted to incorporate a little tribute to a well-known member of the BSG fandom community who is no longer with us: Jim Quon, who went by the handle Scarbuck, who passed away recently and unexpectedly.

It's always a dreadful loss to lose someone so young, and in this case you have a real testament to the power of fandom that so many who never really knew or met the man were saddened to hear of his passing.  In my own case, I've been a BSG fan since damn near the beginning but never really got involved in any form of fandom (other than gabbing about it with fellow addicts who are also close friends) owing to my other geeky commitments. Until the show ended and the gaping hole it left (Which often manifests in a somewhat Bamberish shape - what are the odds?!) drove me into

asta77's arms sobbing.  ;) Still, despite missing out on the cons (except for SDCC '08 - GUH) and the endless comm discussions for so long, I knew exactly who Scarbuck was and I'd admired the terrific photos he'd taken from a variety of BSG events.  Such as: 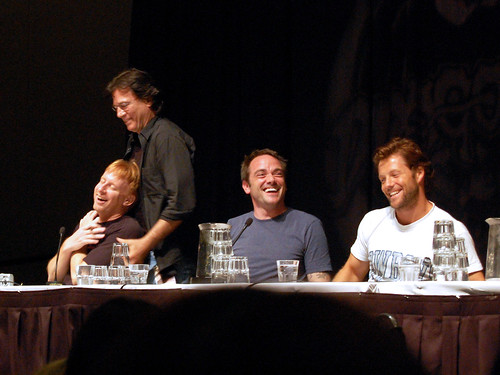