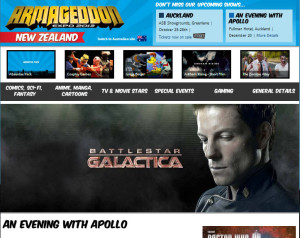 Bit of a news round-up, starting with great news for those in New Zealand (or near), here's your Christmas present: Jamie is doing another "An Evening With" appearance, this time as part of Armageddon Expo in Auckland on 20 December. You can book tickets now right here!  (Also, you and the Germans can start giving us some pointers on exactly how we can manage to book one of these solo shindigs here in the States!)

Next, some new material for us all to enjoy: Admittedly, when the link turned up at first I thought it was another play Jamie recorded ages ago getting another go-round on BBC Radio but then I noticed that in the description, it lists first broadcast as this past Sunday. So maybe he recorded it over the summer while in London for The Smoke?! Sneaky. ;)  Anyway, here it is:

It'll be available to stream for the rest of this week at BBC Radio 3's website, so listen in while you can folks.

And lastly, for our UK followers who still haven't seen Monday Mornings: Fox UK's website for the show, with upcoming episode airdates and more, is now live. It premieres 21 October at 9pm!
Collapse