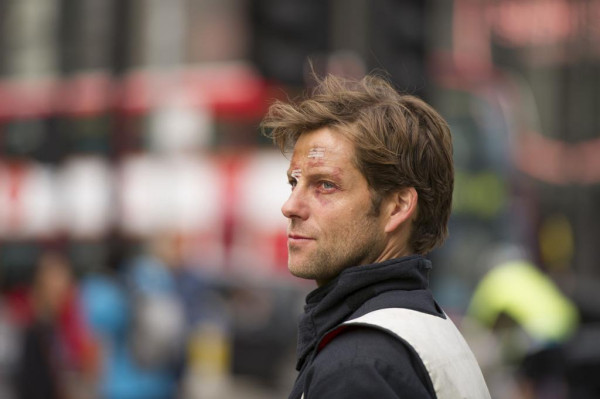 You are probably thinking, "Why is she using a photo from 'The Smoke? for this post?" Well, because........

Instead of typecasting, we're going with he did such an awesome job the first time around the production knew what it was getting. ;) As you can see, Jamie was bit lacking with the details, so

zegeekgirl and I have been searching the far corners of the internet to see what we could come up with. Now, we would love to send you to the official The Better Half site, but, for the moment, it's a dead end. But we did find a production notice which gives us a synopsis of the film:

Joyless, unpleasant, and hyper-critical Calista Ryan is so intent upon the appearance of perfection, she's increasingly oblivious to the needs of her firefighter husband, Jeff, and her two teenage kids. But after being killed in a freak accident, Calista winds up in purgatory, where she learns her soul has been split down the middle, between her unpleasant self and Cali, her bubbly, joyful "better half." Now, Calista and Cali have 48 hours to return to earth and turn the tide of their dysfunctional family -- or it's straight to hell for them both. But whether Calista can reconcile her two disparate natures and join back up with Cali as a fully functional soul, while helping her loved ones avert various crises, remains to be seen.

And finding the film is written by Shay Roehm and written/directed by Michael Winnick led me to Mr. Winnick's IMDB page and, in turn, the page for The Better Half which, again, doesn't tell us much. :/ However, between the film's description and IMDB categorizing it as Action/Comedy/Family, means I can squee and cross an item off my bucket list because JAMIE IS DOING A COMEDIC ROLE.

Hopefully, we'll have more news, especially casting news, to share soon. And maybe Jamie will share a few pics from set if he can. :)
Collapse