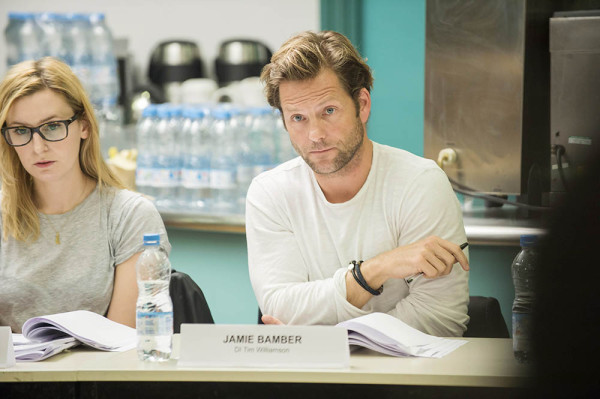 Laura Carmichael and Jamie at the table read for "Marcella"

Terrific news today - or yesterday, depending on your time zone ;) - Jamie is set to star in ITV's new drama, Marcella. You can check out the full press release (and more photos) at the ITV Press Centre. Just a few of Jamie's co-stars will include series lead Anna Friel (Pushing Daisies), Laura Carmichael (Downton Abbey) and Harry Lloyd (Game of Thrones). And the exceptional behind the scenes talent includes individuals who have worked on Broadchurch, Wallander and Law & Order: UK.

Filming is set to begin later this month in and around London. And thanks to the photos we know Jamie will be playing DI Tim Williamson. Below is a short plot description of the eight part series. For all the plot details ITV is willing to share, again, click on the ITV link above.

Set in contemporary London with a British Metropolitan Police Detective at its heart, Marcella is noir thriller told with Rosenfeldt’s unflinchingly multi layered Nordic style. Marcella’s 8 x 60’ episodes will lead the audience through a narrative maze where any character could be a witness, victim or potential suspect. Marcella will get involved in a serial murder case where the modus operandi of the killer bares a striking resemblance to an unsolved spate of killings from a decade ago.